We booked an island tour (semi private – which means that potentially up to 10 other people could book to come with us 4) to cover most of the major sights of the island. We paid and gave our information over. And were told they would meet us at the hotel at midday. As it turns out, for us, no one else did book so it was completely private.

We were picked up at the hotel, and promptly taken to the Prophet Elias Monastery, the highest point of the island. This had some quite panoramic views including a view over the runway which excited the children as they watched a plane moving down to the runway and eventually taking off. Unfortunately, as it was a Sunday, the Monastery itself was closed, but we could still take in the views from where we were.

After making our way back to our private carriage taken to Perissa beach (filled with black volcanic sands). It’s quite a long beach at the area we were on was filled with cabanas in sections, with each section being maintained by an individual establishment. I did not catch the name of the café looking after the section we chose, but we managed to get a front row cabana for 13euros, for as long as we stayed. We purchased some beer and some water, and when Logan and Caitlin were cold from the sea, they had – wait for it – chocolate ice cream.

The water was really clear, and the cool (not cold) temperature was very welcome in the early afternoon heat. It does go from very shallow to fairly deep quite quickly though. So, in the case of children, or at least younger ones, you need to be a bit “aware”. But it was a nice clean beach and if going to the island and you enjoy a good swim in the sea, I’d definitely recommend it. 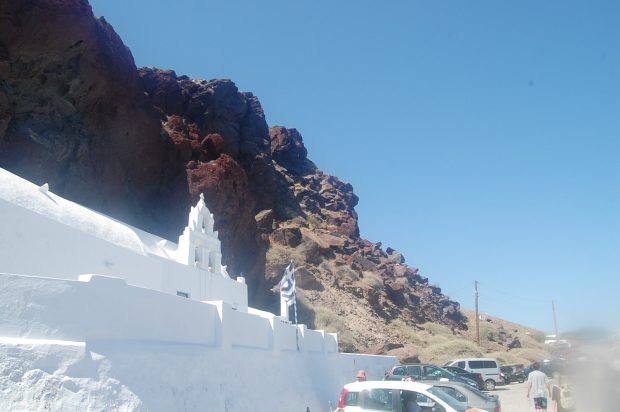 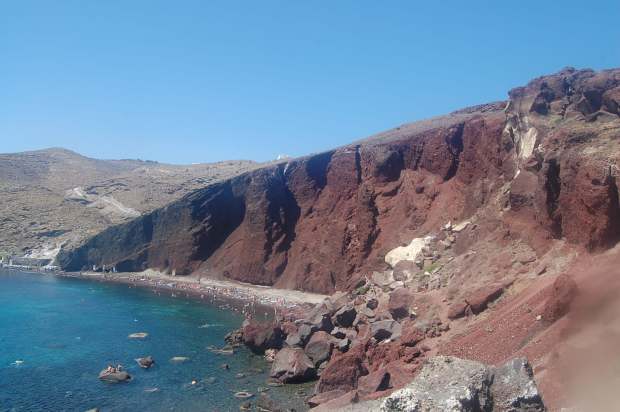 We were then driven across to the Red Beach, but it was a sun trap with no shade, and it was quite a trek down, so we stayed there for pictures only. We didn’t really fancy too much walking in the heat, with Caitlin’s legs. So instead we asked to go to the pre-historic excavations of Akrotiri, which are situated just out of the car park for the Red Beach. They tried to sell us a tour guide for 99euros, by telling us there was no information inside – lies, there are boards with information everywhere. It was a mix of interesting, eerie and awe-inspiring. To think how forward in civilisation, they were all those centuries ago, in comparison to how civilisation was for us not all that long ago.

Afterwards we headed up to Santo wines. We had a wine tasting there and took in the view for a while. We, stupidly (or ambitiously, I haven’t decided yet) decided to go for a 12-wine-flight, knowing we’d have less than an hour… but it was definitely worth doing. Just to have some shade and chill time for a while. It was fun. And eye opening. I REALLY cannot drink dessert wine. And though I don’t really enjoy red wine, I apparently can truly sink it back if it has port-like undertones and I’m in a hot place.

However, it also showed us, that Logan is still having some issues around alcohol; alcohol features in his past, and so we knew he’d had some issues with it. He has seen me drink in the past – I just don’t drink very often so it must’ve been long ago enough to be out of his head. But he sees Bruce have a bottle of ale, or a glass of whisky regularly enough to know it’s ok when he drinks – nothing bad happens. However, he flipped out at the sight of the wine in front of me (it was quite an overwhelming sight in all honesty), but the freak out was only directed at me. So, we explained “Mumma has paid to try these wines. I will not drink all of them all up, but I will just have a taste of each one”. That didn’t entirely pacify him, but did go somewhat into the compromise where he could handle the situation.

Afterwards, as we were heading up to Oia, for the sunset, we decided to find somewhere to eat (word of warning – book somewhere in advance, it’s difficult). We found a nice little restaurant called Oia Gefsis. The food was really good, the server was awesome and they have a sunset terrace you can eat on (we ate down on the patio as we hadn’t booked) but Bruce was allowed to pop up to the bar to take a photo of the sunset. It was a friendly and welcoming place to go, with an almost Italian feel to the menu.

Afterwards, we made our way through the crush of people towards the car park and met our driver to take us back to our accommodation. It was a good experience, but, as others have said, you can enjoy the sunset from anywhere that has a view over the Caldera, Oia is a nice place to go, but I’d be more inclined to visit during the day and get the hell outta there before nightfall – but that’s just cause I don’t like having to deal with the kids being so squashed and panicky.

One thought on “Review: A semi private bus tour of Santorini”